When I was a kid, my siblings and I played a game called ‘Skeeter.’ Basically Slapjack, but using cards with bugs on them. When the card with the mosquito was flipped, you’re suppose to slap it and yell “Skeeter!” The mosquito depicted on the cards was more leggy and with longer wings than real mosquitoes and appeared much bigger.

Every spring I saw bugs looking like those giant mosquitoes, mistaken as real mosquitoes by many, myself included. Eliciting screams from children and the squeamish, arms flailing in a desperate fight for survival, these critters would never land on a person, though they may accidentally bump into them.

Sometimes they are referred to as ‘mosquito hawks’ believed to be a hunter of those nasty little pest. Yet the mosquito hawks have only soft mouth parts making them incapable of biting, let alone killing, other insects.

These are actually crane flies, a harmless creature. I still think of them as ‘skeeters’ as they seem to fly clumsily around from one surface to another, direction chosen in some willy-nilly manner. Skeeter just seems to fit their motions.

There are many types of crane flies throughout the world and several types are found in the Los Angeles area. They start life as a larva, sometimes refer to as leather jackets, living in moist areas such as loose soil or leaf debris, feeding upon small roots. Some species’ larva are semiaquatic or aquatic. An European transplant, the marsh crane fly, has recently got establish in California. It is consider an agricultural pest, its larva damaging turf and pasture grasses, and cultivated seedlings. But the native species do little significant damage to plants. 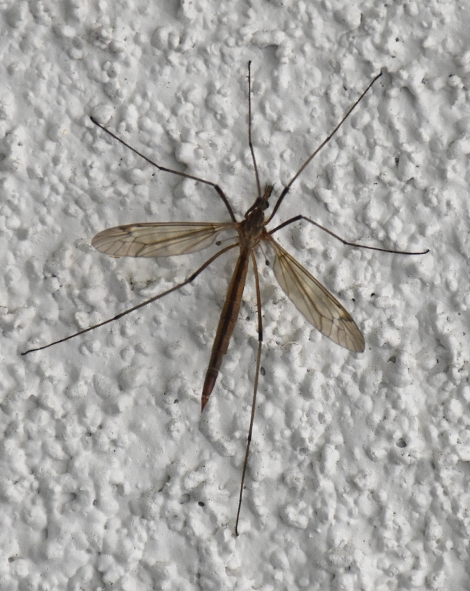 I’ve come to like the crane flies. They are heralds of Spring, often using my front porch as a resting space. As I work in the garden or walk through the grass, I see them scatter, looking for another spot to hide and rest. The life span of the adults are short, 10 – 15 days, and as the days get warmer they will be rarer and rarer. By summer, they will be gone as a new generation begins life below our feet.

The truth is they are silly little bugs (though they may disagree), and a source of food for many birds and lizards. People call them a pest, but they aren’t. The crane flies are a rather successful group of insects, but to me they will always be skeeters. Although in researching this I found another name they go by: gollywhoppers.

So skeeters or gollywhoppers, let them be. By the time the summer sun is ablazing, they will be gone.

Black-eyed Susans enjoying a Colorado summer.
Toyon bonanza‼️
Last month in Colorado - bighorn sheep walking along US Hwy 34.
While my two big sages duke it out for dominance, the hummingbird sage (Salvia spathacea) just keeps blooming.
Battle of the Sages! White Sage (Salvia apiana) vs ‘Allen Chickering’ Sage (S. clevelandii x leucophylla). The white sage has got the height but the Chickering the mass. In terms of flowers it’s a tie at 3.4 gazillion each.
Margarita BOP:
Loading Comments...
%d bloggers like this: