Mt. Cahuenga, on the western end of Griffith Park, beckons

One morning I decided to hike up in Griffith Park. Normally my morning walk is in Kenneth Hahn Park, it being close to my home. Back in my grad school days though I lived up in Hollywood, just below Griffith Park and regularly took my dog up there to hike. I was looking forward to revisiting one of my old walks starting at the end of Canyon Drive and heading up Brush Canyon. After dropping my son off at school I begun the trek across Los Angeles to get to the park. My excitement for the trip quickly diminished.

There are definitely pluses to living in a city, but as I slowly creeped from stop light to stop light I was reminded of the minuses. The key to living in Los Angeles is knowing there will be traffic and just accepting it. But even in the most serene state of mind, it’s challenging.

My mind had to always remain focus, calculating the movement, speed and dangers of other cars and pedestrians. My mind likes to wander and I find myself having to keep calling it back and to stay alert. Driving down the streets, the buildings seem to close in on you – their facades right up to the sidewalk, the sidewalk right up to the park cars, the park cars right up to me driving by as occasional bicyclists zip past. There is no space. These are older streets, built up before code required the maintenance of some type of green space. The only sign of nature was often the street trees planted every few yards down the sidewalks. With only four square feet of exposed soil to grow in none of them look to be thriving.

The puzzle pattern bark of  a sycamore tree (Platanus racemosa)

As I got close to Griffith Park, the streets turned residential and lawns, flowers and big healthy trees appeared. I pulled through the gates to the park and found a parking space. There were some grassy areas with picnic tables and a little playground but this was a more undeveloped part of the park. It was landscaped with a mix of native and non-native plants. Large pine trees, transplants to these parts, grew by equally large sycamores and oaks. Within a hundred yards of the road side, the coastal sage scrub and chaparral competed with the invasive grasses and weeds.

It was a warm day and the air was filled with the heavy smell of the brush. With no busy streets located nearby, the constant noise of traffic was replaced by the call and responses of birds. I was still tense. I was glad to be out of the car, but was closed off to what was around me. I had my camera with me, but screw taking pictures for the blog. I just needed to walk.

Growing by the side of the trail California Four O’clock (Mirabilis laevis var. crassifolia) looking good at ten o’clock

There was a turn off leading to an old rock quarry where a tunnel was cut through a rock outcropping. These are the Bronson Caves featured as the entrance to the Bat Cave in the 1960’s Batman series. But I continued straight, the road turning to dirt, the landscape returning to an untended state except for the concrete water channel and catch basin used to slow the quick-flowing runoff from heavy rains. 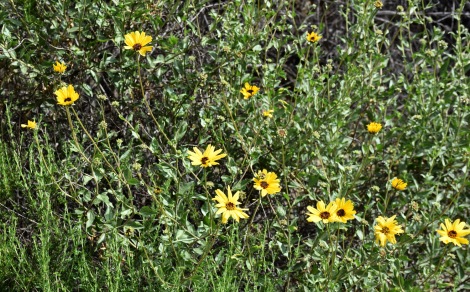 Sometimes it takes a while to get tuned into the rhythm of nature. With each flower and oak tree past, I felt tension drain. In a sense, there was as much going around me as there was on the city street. Roots pushing deeper, insects flitting from leaf to flower, sunlight being turn to food. Nor was I alone as other people took advantage of this path. Yet there was a different rhythm. Not one based on hours, minutes, seconds. Not one based on getting things crossed off the to-do list. This was a rhythm based on the cycle of the sun and of the seasons. Though I and my fellow hikers still had our to-do lists and times to keep, there was an invitation to just be.

The dirt road starting climbing. This was a great trail for a workout going up over 800 feet in about a mile and a half. With the heart beating faster, more tension was chipped away.

One of the nice benefits of gardening with native plants is when you go out hiking you recognize what your seeing. Instead of “Oh, that’s an interesting bush,” it’s “Wow, look at that ceanothus blooming.” And indeed, the ceanothus, also called California Lilac, were blooming.

The plants were almost entirely covered with tiny white flowers – some pure white, some with a tinge of sky blue. There are four different types of ceanothuses that grow up in Griffith Park – greenbark ceanothus, hairy ceanothus, big pod ceanothus, and chaparral whitethorn. I didn’t get a close look at the leaves or bark so I can’t confidently identify which ones I saw. But seeing them, and recognizing them gave me a connection to the place. Ceanothus makes a great plant for a native garden with varieties ranging from low-laying groundcover to 20′ tall bushes that can be trimmed into a small tree, with flower colors going from pure white to a dark indigo. 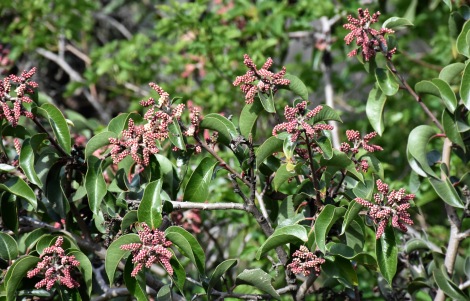 There were several plants here I often see in Kenneth Hahn Park such as the California Sunflower. In Kenneth Hahn, the sunflower plants are bushy and lush, with heavy green foliage. At Griffith park the sunflowers were leggier with less foliage. The flowers are smaller and fewer, but still nice to see their cheerful presence. Located further inland, Griffith Park is warmer and with less cloud coverage from the marine layer. Its soil is from broken down granite, courser and rockier, compared to the clay soil at Kenneth Hahn Park. Perhaps these factors contributed to the differences.

Along the ravine bottoms, sycamore trees grew, new leaves emerging in the spring sun. On the hillside oak trees grew, their trunks twisted and gnarled with age. In the yard and on the streets, we like our trees nice and straight, often cutting down those that don’t fit our organize aesthetic. Give me the twisted scarred trunks that tells the tale of hard years, droughts, torrential downpours and punishing Santa Ana winds.

Coast Live Oak (Quercus agrifolia) with a story to tell

I reached the end of the trail at a closed off paved road, Mt. Hollywood Drive. It’s a lovely road to walk on, nice and mostly level with views of both the LA Basin and the San Fernando Valley. Standing on the road, I wonder what all of Los Angeles would look like when we have all moved on and nature reclaims her land. And I appreciate the city again, this crazy scene full of hidden gems. 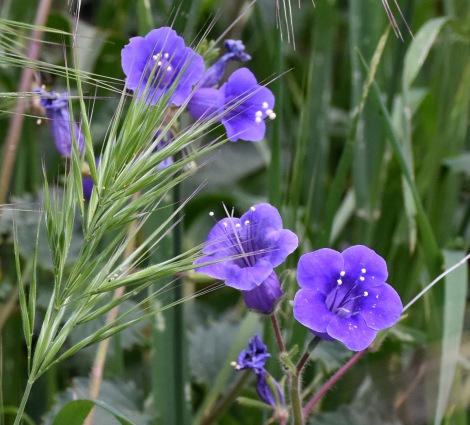 With the tension of the city and the traffic gone, I turn back around to head down to the hustle and bustle with serenity restored and strengthen. And luckily for this post, felt calm enough to take off the lens cap and snap some pictures on the way down.

The trail up Brush Canyon begins at the end of Canyon Drive, north of Franklin, between Western Ave and Beachwood Dr. See the attached map showing the trails and other features in Griffith Park.

2 responses to “Griffith Park: Losing My Serenity and Regaining It”

Black-eyed Susans enjoying a Colorado summer.
Toyon bonanza‼️
Last month in Colorado - bighorn sheep walking along US Hwy 34.
While my two big sages duke it out for dominance, the hummingbird sage (Salvia spathacea) just keeps blooming.
Battle of the Sages! White Sage (Salvia apiana) vs ‘Allen Chickering’ Sage (S. clevelandii x leucophylla). The white sage has got the height but the Chickering the mass. In terms of flowers it’s a tie at 3.4 gazillion each.
Margarita BOP:
Loading Comments...
%d bloggers like this: