Starting east of Oxnard and encompassing the Santa Monica Mountains from the Malibu coast to the 101 freeway is the Santa Monica National Recreation Area. Made up of patches of state, county and city parks and national park land, the area reflects the reality of natural areas in Southern California. The mountains too rugged to be developed are envelop by the city with developments creeping up the canyons. Coyotes and mountain lions find refuge in these areas surround by 9 million humans.

Boney Mountain overlooks the Rancho Sierra Vista/Satwiwa parcel of the Recreation Area. Originally land used and managed by the Chumash Native Americans, the area was later used as a ranch with non-native grass being brought in for the cattle, replacing a lot of the native vegetation. But on the hillsides and in patches of the grass areas native plants continue to hold on.  The area is bisected by numerous trails. 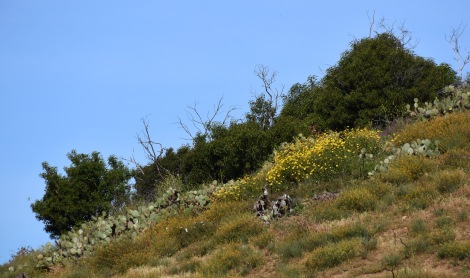 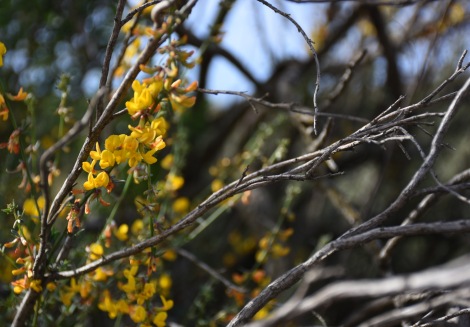 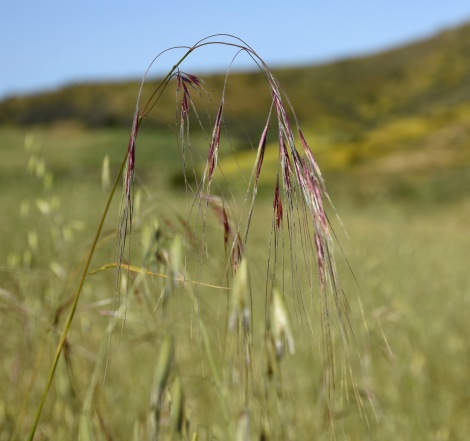 Waist high with their tops heavy with seeds, these invasive grasses dominate the landscape. However, here and there, some purple needlegrass (Stipa pulchra), the state grass of California, still grew. Yet it is doubtful if this area will ever return to its original flora.

Poppies were seen in several areas, breaking up the green/brown palette of the grasses. Besides the common California poppy (Eschscholzia californica) were some of its cousins, the collarless poppy (Eschscholzia lemmonii). They look much the same except for a little disc – ‘collar’ – at the base of the flower. 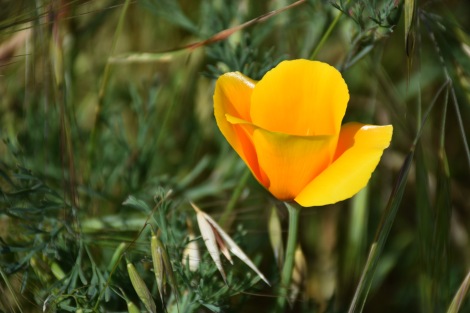 Collarless poppy (Eschscholzia lemmonii) – compare the base of the flower with those of the California poppy above. 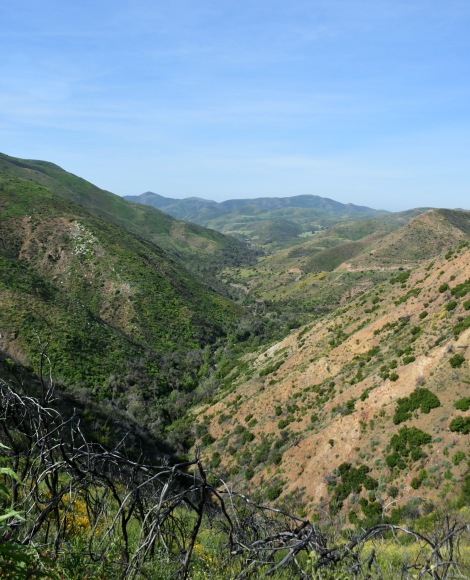 Climbing up the hillsides and leaving the grasses, the views open up and the native scrub starting taking over.

The most common flower was the purple nightshade (Solanum xantii), poisonous if eaten but why would you want to do that? These flowers were often found at the edge of the trail or in disturbed areas. 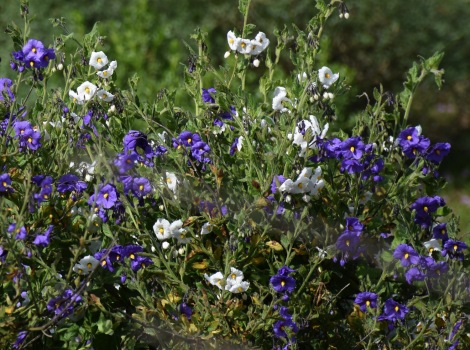 There was one patch of purple nightshade near the trailhead where some of the flowers were white, but judging from their shape are the same species.

The flowers in the area were numerous because of a wildfire that burned a lot of this area in 2013. With the heavy brush usually found in the coast scrub burnt back, wildflowers are able to put on a show. Not quite a superbloom, but wonderful nevertheless. Overlooking the grassland, the challenge of managing wildfires is clear as the mountain sides full of brush are being invaded by long slivers of houses, surrounded on three sides by the flammable landscape.

Another common flower seen was the Parry phaclia (Phacelia parryi).  I spotted this little one growing solo, but most of them are in bunches of cheerful purple. 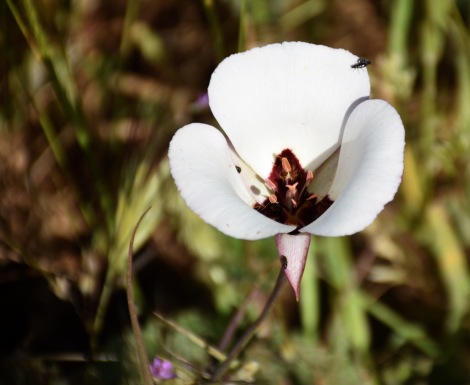 Another beautiful flower was the white mariposa lily (Calochortus species) . This flower grows from a bulb. Soon it will go to seed and then die back till next year rains waken the bulb from its summer sleep.

The trail was a lizard free-for-all, ever step I took sending another little lizard scurrying. The larger lizards hid in the brush along the side, occasionally dashing across the trail. The smaller younger lizards tend to be brownish or black and blended in with the dirt on the trail. The adults had more color, which is probably why they hid more, not wanting to be a hawk’s snack.  I also saw a Common King Snake, four to five feet long. Alas, it slithered quickly and had mostly disappeared before I had my camera ready.

There were butterflies too, including this beautiful Sara’s Orange Tip, (Anthocharis sara), feeding on a wild hyacinth (Dichelostemma capitatum).

Along the trail a large hornworm bulks up on some leaves.  Named for the spike at the back end, the hornworm is a caterpillar.  And the spike?  Pretty useless, but perhaps to a predator it will appear formidable.  This fellow is pretty gutsy being out in the open.  Caterpillars make a good meal for many birds, and some of those larger lizards may also enjoy them.

If it avoids being eaten,  it will soon burrow into the ground to form its cocoon.  It will emerge as a White-lined Sphinx Moth (Hyles lineata), a rather handsome insect.  These are fairly large moths.  The one above was found hiding on my backyard gate and was just under two inches long.

Throughout the area, the dead branches and trunks from the wildfire stuck up above the returning brush. Morning glory (Calystegia macrostegia ssp. cyclostegia), took advantage of a lot of these branches using them to climb up above the other plants to receive more sunlight.

Below me, I notice a class outing. Couldn’t ask for a better classroom.  Where they are at, they would have seen no sign of the city, but as the picture showed just over the ridge there it was.

Small white flowers showed up by the trail – caterpillar Phacelia (Phacelia cicutaria var. hispida). Pretty little things, easily missed and a reminder to slow down.  It is one of the reasons I like to take my camera with me as I hike, so I would slow down and look around me, especially at the details. 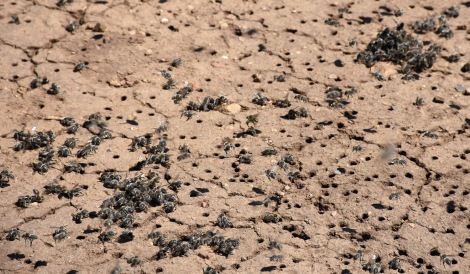 Another reminder to slow down came as I was approaching what appeared to be a swarm of flies on the trail. Not giving it much thought I cut right through them and saw they weren’t flies.  They were BEES! Not honeybees. With a similar shape and stripe pattern, these bees were black with the stripes whitish.

Their hive was a series of tunnels in the ground. What got them so worked up I couldn’t tell, but thankfully they paid little attention to me.  I wasn’t able to figure out exactly which species they are, perhaps of the miner bee family (Andrena species).

Heading back to my car, I came upon black sage (Salvia mellifera) flowering. The flower stalks of sage often remind me of a Dr. Seuss drawing – a whimsical flower where out of each flower pops up another flower and another. Several California sages flower in a similar manner.  Both purple sage (Salvia mellifera), also found in this area, and Cleveland sage (Salvia clevelandii), found in the hills above Orange County, put on a great show.

Back in the car, my hiking partner agreed it was a good outing and wanted to add there were a lot of great smells along the trail too.

The Rancho Sierra Vista/Satwiwa area in the Santa Monica National Recreational Area is located just south of Thousand Oaks.  If using Google maps for directions, the final road it directs you to is restricted access.  Put in Sycamore Canyon Trailhead, Thousand Oaks instead.  Be sure to include the city!  Turn onto Sycamore Canyon Trailhead and drive about a half mile to the parking lot.

Amended: The side-blotched lizard, caterpillar Phacelia, and miner bees were misidentified in the original text.

Coming in for a landing. Bladderpod (Peritoma arborea) flowers and honey bee.
The closer you look, the more elaborate flowers become - narrow-leaf milkweed (Asclepias fascicularis)
I made a new friend! This young Black-headed Grosbeak (Pheucticus melanocephalus) flew into my Dad’s window and fell to the ground. I tried to put him on a branch for safety, but he liked my finger better. I named him Jimmy - don’t know why, just seems right. After 30 minutes he flew off.
Great Golden Digger Wasp (Sphex ichneumoneus) gathering nectar from ashy-leaf buckwheat (Eriogonum cinereum). It’s interesting what new native plants can bring to the garden. Never seen this wasp before until a few weeks ago when my new ashy-leaf buckwheat and California buckwheat began to blossom. They love them! Interesting, the red-flowered buckwheat which I’ve had for several years never attracted them. If you have a veggie garden, the great golden digger wasp is a great ally with the female preying on members of the grasshopper family.
Cliff Aster (Malacothrix saxatilis). For a plant that can look so weedy, I can’t get enough of their flowers that float above the dry brush of summer and fall. And in the middle of the flower appears a tiny, magical city - perhaps occupied by Who’s?
Shooting with a macro lens can reveal some incredible detail that is hard to see with the eye. But then putting the macro photo on your cell phone makes it hard to see again. So swipe to see a ‘macro’ of my macro and the strange, cute translucent bugs that inhabit this gumweed (Grindelia camporum). I’ve never seen these insects on other flowers in my yard and this is the first year I planted gumweed, so… Where did they come from? There’s more going on than we realize…
Loading Comments...
%d bloggers like this: