We native gardeners are a noble bunch, but we do have a dark side…

One of my goals with gardening with native plants is to avoid the use of pesticides. As mention in earlier post, insects are vital for a healthy eco-system, providing a valuable source of food for wildlife. The majority of them are harmless. Those that do cause damage, in a healthy garden, rarely cause significant damage. Even in growing vegetables and fruits, most pests can be easily managed.

But then there are earwigs… 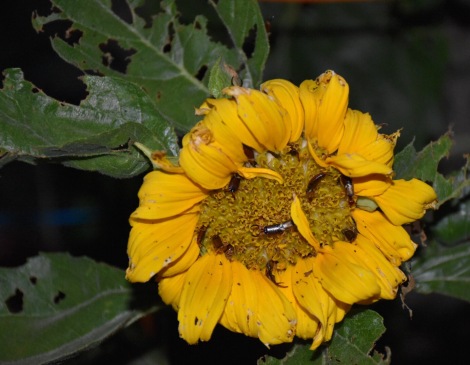 Sunflower and leaves being eaten by European earwigs (Forficula auricularia).

Earwigs are bugs design to give one the heebie-geebies. Brown elongated insects, up to 3/4″ long, with short, almost unnoticeable wings they have a particularly fearsome looking pair on pinchers on their back end. Luckily they appear more fearsome than they are. While they are used in hunting insects, their pinch does little harm to humans. Nor, contrary to superstition, do they crawl into the ears of sleeping humans to lay their eggs.

In many situations, earwigs can be beneficial to the garden. They mainly feed on decomposed organic matter and even eat soft-body insects such as aphids.

The earwigs found in California’s urban areas are not native, arriving here through cargo shipments.  The two found most often in California, as well as in many areas in the United States, are the Ring-leg earwig (Euborellia annulipes), and the European earwig (Forficula auricularia). The lawns and gardens found in cities and suburbs provide ideal habitats for them. In natural areas where there is much less moisture, they are rare.

A mother earwig tending to her young.

Earwigs are an unique insects. The female earwig will stay with their eggs, tending them and defending them. Once hatched, the mother continues to care for the young earwigs through their first several molts. It’s hard to be against such a beneficial, maternal bug. And for a long time I left them alone.

Then I planted strawberries. The plants started fine and soon small green berries were growing. By the time they were ripe and ready for picking I found them half eaten, sometimes with an earwig burrowed halfway through the berry.

I planted several basil plants. When I came out the next morning, their leaves were almost gone.  Going out at night with a flashlight, I found the culprits – earwigs.

And now this year… First I had some sunflowers whose leaves were being eaten. From there, they started eating the leaves of my pepper plants. 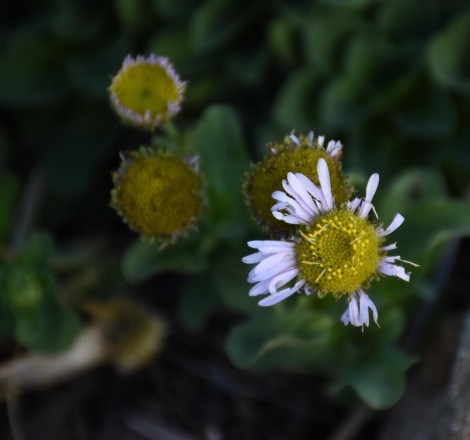 I also had several seaside daisy plants (Erigeron glaucus) in the backyard. While the ones in my front yard have flowers on them almost all year long, the ones in the back rarely got flowers and don’t grow as well. I believe this is because they were planted in some ground that was covered by concrete for years so the soil isn’t ideal. But this year, finally, they started getting a lot of flower buds. But when the flowers bloomed, they had no petals or a couple of scraggly ones. What was going on?

Earwigs. Caught them red handed. You can eat my basil, but don’t you dare touch my seaside daisy! In the words of the immortal Bugs Bunny, “Of course, you realize, this means war!”

But there are a lot of problems with pesticides. The first is that they kill indiscriminately. Pest insects or beneficial bug, it doesn’t matter. And if a bird or lizard catches that insect before it died, they can end up being poison. 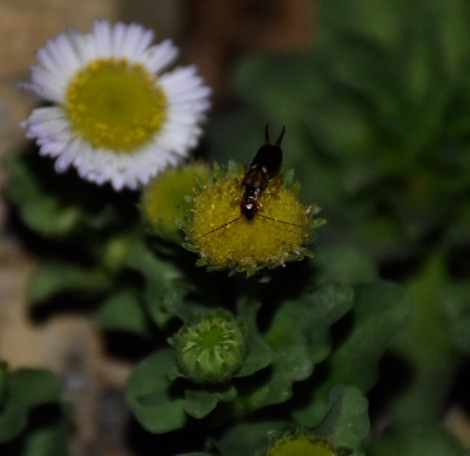 European earwig on a seaside daisy.  The petals have already been eaten.  Butterflies frequent these flowers so pesticides aren’t suited to control the earwigs.

Since the earwigs were eating my flowers, any poison put on them will also affect the butterflies, moths and bees that visit these flowers. If put on leaves, it can harm insects such as ladybugs walking on those leaves looking for aphids and other insects to eat.

Biological controls can be insects introduced into the garden manually. Ladybugs are a classic example, available for purchase at many nurseries. Other insects used for pest control include green lacewings and praying mantises. A yard filled with native plants will also help attract predatory insects. Certain nematodes – microscopic worms – can also be used for pest control though other nematodes can be pests themselves. Sources for beneficial insects can be found online. One site I’ve used for purchasing biological controls is Orcon.  Their site is also an excellent source of information.

For earwigs, birds and frogs are possible biological controls but for me the birds aren’t doing the job and my yard is way too dry for frogs. I do have lizards in the yard, but since lizards are active during the day and earwigs at night, the lizards don’t seem to have any affect on the bugs. Praying mantises are listed as a beneficial insect that would eat earwigs so I might give them a try. However, beneficial insects are most effective before the pest insect population gets too large. Getting predatory insects established in the yard before the pest insects get unmanageable will go a long way in keeping the pests in control.

Another method in IPM is to eliminate potential food or shelter for the pest insect. Earwigs need a moist area to shelter in. Wood mulch can provide such an area. But nothing is ever easy, is it? One thing you hear over and over in gardening with natives is mulch, mulch, mulch. Mulch keeps the soil cool, help retains moisture in the soil for the plants, and reduces the amount of weeds – another type of garden pest. Wood mulch also provides nutrients as it breaks down. Inorganic mulch such as gravel or rocks are less prone to harbor insect pests and are one possible solution, especially for plants from arid regions.

Two plastic containers placed in the ground as earwig traps.  Tuna cans also work well.  I fill them with a half inch of vegetable oil and add several drops of fish oil.

There are two commonly used traps effective with earwigs. The first are shallow containers buried up to their top in the soil and filled with vegetable oil with fish oil or bacon grease added in. Not even bugs can resist bacon. I’ve used this trap before with earwigs and it is very effective. Smelling the fish oil or bacon grease, they go to the container and fall in, unable to get out. After doing this for a couple of weeks, the number of earwigs in the yard are greatly reduced. Place the traps out in the evenings and empty in the morning. I recommend not doing that right before or after breakfast!

The last time I used these traps I didn’t have a dog. Now with my dog, I’m afraid he will lick the traps clean and eat a breakfast of marinated earwigs. While my vegetable garden has a small fence guarding it, this won’t work for the seaside daisies that are in open areas. So I’m going to try another trap. Take some damp newspaper and roll it up. Put the paper out in the evening. Earwigs will crawl into the rolled up paper for shelter. In the morning time, either toss it in the trash or shake the earwigs out into a bucket of soapy water. I will have to see how well it works.  However, the first challenge for this is to get some newspaper.  A disadvantage of getting your news on your cell.

In desperation I have used organic pesticides. When earwigs were devouring my basil plants, I used a neem oil pesticide that seem effective. I’m not sure if the oil killed the earwigs as much as deter them from eating the basil, but the basil stopped being eaten. I limited the application of the pesticide to just the plants being affected and only for a limited time. Since the basil plant was meant for my and my family consumption, I wasn’t too concern about affecting other insects that might seek to eat this plant.

But maybe I should. In researching this post I found that organic pesticides are not necessarily better than chemical pesticides. Neem oil, which I used on the basil, can be as destructive to bees as non-organic pesticides. Rotenone was once a common organic pesticide. But it is deadly, even being poured into bodies of water to kill unwanted fish. Actually, any fish for that matter. The pesticide was ban in 2005, but the ban was revoked in 2010. For more information on some of the issues with organic pesticides, see Mythbusting 101 for more info.

In IPM, pesticides, organic or not, are considered a last resort. One problem with pesticides, especially when used on a large scale is that while they may eliminate the pest insect, they also eliminate beneficial and harmless insects too. This may result in the pest insect returning in greater numbers because there are no other insects occupying this habitat or predatory insects that can limit the pest numbers. I don’t necessarily refuse to use any pesticides. For wasp nests that are on our house eaves I will use wasp spray. Yes, wasps are beneficial and I leave them alone in the yard. When our yard had a very bad infestation of fleas that were unaffected by organic pesticides (I think I even heard them laugh), I resorted to chemical sprays. I knew that meant most of the insects in the yard will be killed off, but the legs in our family were covered in flea bites. Ironically, the flea infestation happen after our old dog died who kept the flea population in check because of the flea medication used on her.

The ultimate goal is to establish a system of natural check and balances in the garden, or farm, so the need for pesticides is none existent or minor.

This morning I went out to check earwig traps I set and found a large number of dead earwigs in them. Hopefully after a week or two of setting those traps, the number of earwigs will be reduced enough so my plants can thrive with plentiful flowers and peppers!

And, of course, if worse comes to worse there is the ultimate pest control. Stomping on the little buggers…

An excellent source of information about integrated pest management can be found at University of California IPM website.

2 responses to “The Battle of the Earwigs”

My clovers! Among the wildflowers sowed this year I included two native Californian (as well as native Angelino) clovers: Tomcat clover (Trifolium willdenovii) and Foothill clover (Trifolium ciliolatum). Alas, very few made it. I will try again, sowing them before the first rains so the poppies, which reseed themselves, won’t get a head start on them and smother the clover seedlings. The other issue is being eaten by bugs! Hopefully with plants now established in the yard, those lil’ buggers will chew on bigger plants. #nopesticides As an old adage goes, sports fans and gardeners share a common phrase, “Wait till next year!”
Nobody said being a flower was easy... California bush sunflower (Encelia californica) showing a little wear and tear #inthegarden.
An exuberant June grass (Koeleria macrantha). I love this little native bunch grass with its bushy seed heads. Even when dormant, the seed heads remain upright and attractive.
Just a shot that makes me wistful for Ireland...
Sacred datura (Datura wrightii) flowers are beautiful, large, graceful, and white. Before it unfurls though, the flower shows how ingenious nature’s designs are.
If only my sage would flower more... A hybrid between two SoCal natives - Cleveland sage (Salvia clevelandii) and Purple sage (S. leucophylla) - Allen Chickering sage (S. ‘Allen Chickering’) is a strong garden performer.
Loading Comments...
Comment
×
%d bloggers like this: