“In the great Central Valley of California there are only two seasons—spring and summer. The spring begins with the first rain-storm, which usually falls in November. In a few months the wonderful flowery vegetation is in full bloom and by the end of May it is dead and dry and crisp, as if every plant had been roasted in an oven.”       –John Muir

(Excerpt From: Muir, John. “My first summer in the Sierra.” Oxford Text Archive, Oxford University, 1911. iBooks. This material may be protected by copyright. Check out this book on the iBooks Store: https://itun.es/us/l9ETC.l)

What John Muir wrote about the Central Valley can apply to much of Southern California too. East Coast transplants often lament they miss having seasons. Of course, that is often the same thing that attracts them here in the first place. In the SoCal cities and suburbs, people work hard to maintain this appearance.  Our lawns are well watered and fertilized, staying green year-round. As the flowers of one annual starts to fade, it is replanted with another that is beginning to bloom. Green trees line the streets year around. And in the middle of Winter we throw a big parade featuring flower cover floats rolling down sunny streets. A tough illusion to maintain in the northern cities where Winter claims its domain with blankets of snow, covering up any speck of green, freezing any aspiring flower.

A view from Kenneth Hahn State Recreation Area.  The left photo was taken in November, the right in March.

But this lack of seasons is just an illusion, the result of people migrating from lands where Winters are more extreme, and a year-round regiment of landscape maintainence.  Hiking in the natural landscapes around L.A. or working with native plants in the garden, one can see how the seasons passing – how the coming and going of rain, the lengthening and shortening of the days, and the rise and fall of the temperature – triggers the plants.

With the last Winter rains long gone, brown returns to the hillsides. The spectacular superblooms featured in countless Facebook feeds and drawing huge crowds are gone. But as the flowers fade and the visitors go back home the show continues in ways just as dramatic and amazing.

The flowers of arroyo lupine (Lupinus succulentus) become clusters of seed pods that ripen as this annual dies off.

It is disconcerting at first hiking on the hillsides where lush fields of green have become “dead and dry and crisp, as if every plant had been roasted in an oven.” But with discerning eye, one can see the natural succession of wild lands. A field of blue lupine flowers are now filled with brown skeletons with seed pods where the flowers were. But even as the plant is dying, the seeds in that pod are ripening. Dried, the pods will pop open, scattering their seeds. Some will be eaten by birds. Others will fall in tiny cracks and crevasses to wait, sometimes years, for the right amount of rain. The blue fields will return.

Wild cucumber (Marah macrocarpa), a wispy vine that returns every Winter is now withering away, but on it stalks are formidable seed pods, covered with spikes up to a inch long. I assume it seeds must be tasty to animals for such defenses. Eventually the pods dry up and crack, spilling four to five large seeds.

Nor are all the flowers gone. Other annual wildflowers, showing a little more patience, bloom now having less competition for pollinators. But most of the flowers now are found on the perennials. These flowers may not be as showy as the annuals, but continues the yearly cycle of the chaparral. 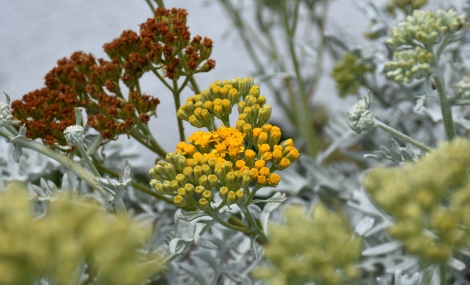 A cluster of flowers on a Western elderberry tree (Sambucus mexicana).

The Western elderberry trees (Sambucus mexicana) bear clusters of tiny greenish-white flowers that will become blue berries. All parts of the elderberry tree is poisonous, even the berry until they’re ripe. Then it can provide food for wildlife or be used for making jams and pies.

Another native fruit tree that’s now flowering is Holly-leaf Cherry (Prunus ilicifolia).  It too is an important source of food for wildlife.

California buckwheat (Eriogonum fasciculatum) starts blooming with white/pinkish white flower clusters, at times hiding the rest of the plant. The flowers dry to a rusty brown seed head that can be cut and used in dry flower arrangements. 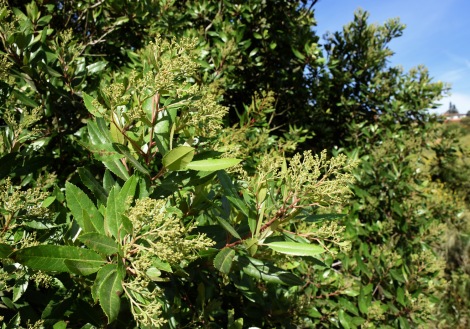 Toyon (Heteromeles arbutifolia) getting ready to bloom in the summer.

Other plants give a hint of what is to come. Toyons (Heteromeles arbutifolia) are covered with cluster of tiny buds that will start blooming with summer’s arrival. While not a dramatic flower, they will add a shade of white to the summer hillsides. It’s flowers will then become the red berries in time for the Winter holidays, giving toyon another common name: Christmas Berry. 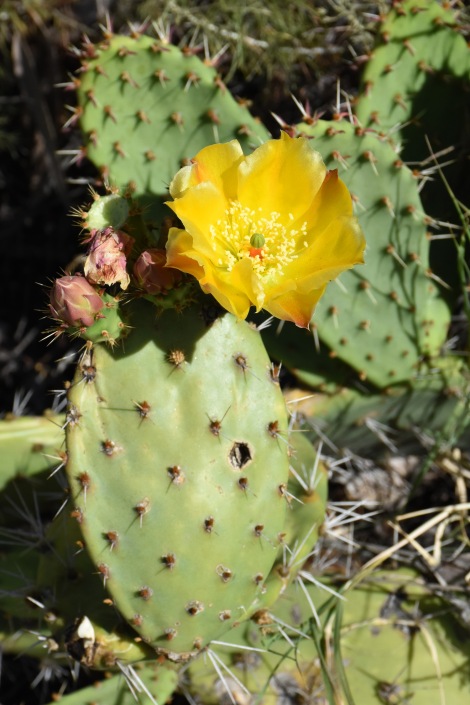 Some of the most beautiful flowers of the year will come from a less attractive plant. The prickly pear cactuses (Opunita species) have wonderful flowers, rivaling any wildflower.

One of the reasons that the hillsides in L.A. turn so brown are the invasive grasses that dominate. Mainly annual grasses, they soon die after the rains have past, dropping hundreds of seeds for the next year. 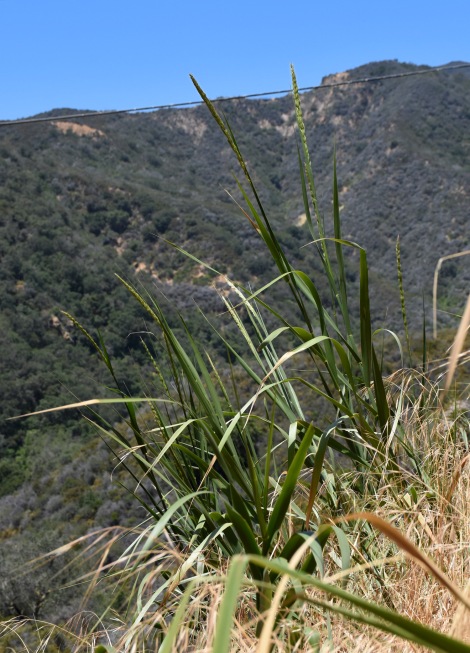 There are still blades of green though, often from perennial native grasses that have managed to hold on. Giant wild rye (Elymus condensatus), with it seed stalks rising up to eight feet, continues to grow as do species of bent grass and needle grass. Being cool season grasses, they will become dormant and turn brown as it heats up, but depending on how wet the winter the green may last into the summer. 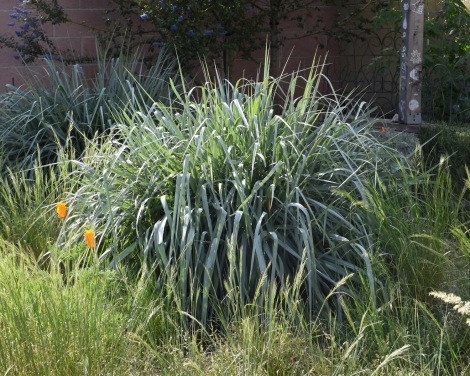 A selection of wild rye, ‘Canyon Prince’ can be a great garden addition. More compact and shorter than giant wild rye, the leaves are also a stunning bluish green. Needle grass (Nassella species), including the California state grass, purple needle grass (Nassella pulchra), are also good speciment for the garden. Diego bent grass (Agrostis pallens) can be used as a lawn substitute, able to stay green through the summer with regular water.

Every ending in nature brings a new beginning.  Our Lord’s Candle (Hesperoyucca whipplei), a local yucca plant, after three to fifteen years will send up 10 foot spike crowned with spectacular white flowers. This beginning of a new generation also marks the end as the plant will die after flowering. Yet at the base of the yucca will be some new ‘pups,’ offshoots from the mother plant.

After the flower of the California poppy (Eschscholzia californica) dies, a long seed pod grows up to three inches long.

In the yard, work for next year’s wildflowers can begin. Seeds can be collected from the current batch. For the California poppy (Eschscholzia californica), as the petals fall away and the leaves begin to wither, the plant directs its energy to producing long seed pods full of round little seeds. Eventually the pods dries to a faded brown till it suddenly pops open, scattering next year’s flowers. Each poppy plant will produce hundreds of seeds. 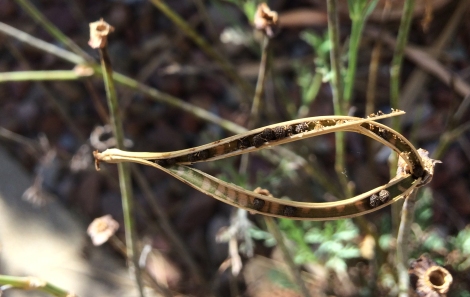 Before the pod opens, it can be pulled off and the seeds collected. The pod should be completely brown. Grab the pod at the base, holding it securely. You should be able to gently pull it off. If it doesn’t come off easily, give it more time for the seeds to ripen. It is important that when you pull it off you are holding it securely at the base. If you pull from the tip, the pod can pop open when it’s pulled, spilling its seeds. Holding the pod over a glass jar, opening it up. If it is very dry, it may do so as you release tension on it. If not, use a fingernail to slice into the side of the pod and split it open. The seeds will be line up like peas in a pod. If they don’t fall out, they can be gently rubbed out into the jar. Put the jar in a dry, dark spot. I usually like to leave the jar open for a few days to let any moisture on the seeds to dry. Otherwise put the lid on securely and wait for the Winter rains to come.

The pods can be harvested to collect seeds for sowing next year.

Leave some of the pods alone to provide food for wildlife and for the poppies to do their own reseeding. About five years ago, I sowed California poppies in my yard and I haven’t had a year where I didn’t have poppies reappear, sometimes in unexpected places.

Do not collect the seeds of poppies, or any other wildflower, in the wild. Leave those seeds behind so nature can continue her show.

As the days become warmer and brown starts to dominate the color pallet, do not be deterred from walking the trails of the urban wilderness. There is more going on there than a quick glance would suggest. Put on a hat and sunglasses, grab an extra bottle of water, and see the succession of seasons.

Of course, if you really need a good fix of green, do as John Muir did – the high mountains await.